Attic-Undercroft House is exhibited in the Museum of Brisbane’s “Micro Histories” exhibition as part of the Asia Pacific Architecture Forum, with drawings, photography and model acquired by the museum. 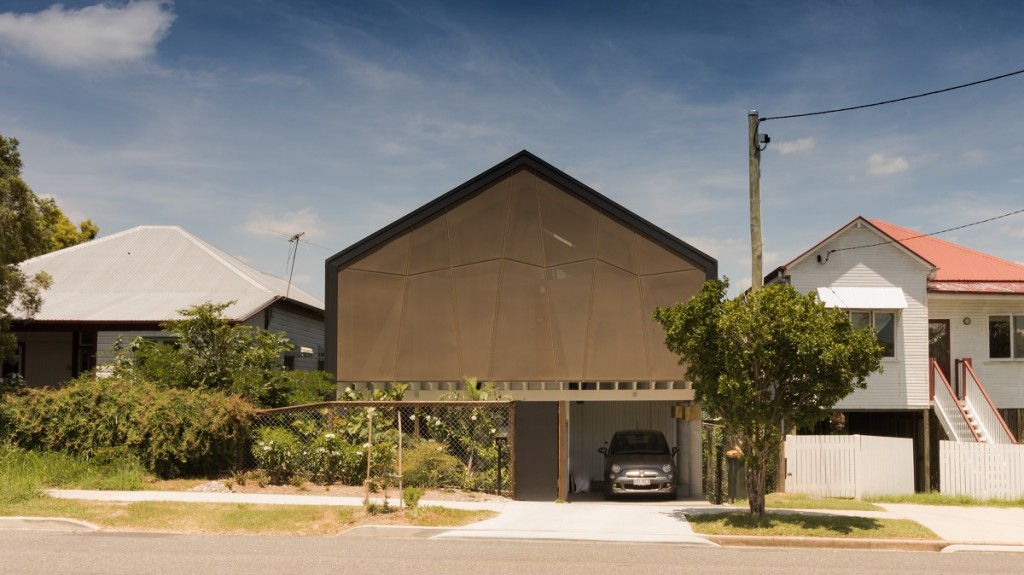 Baber Studio has been commissioned to transform part of the Fryer Library into an object-based teaching space.

In this presentation, architects Kim and Monique Baber of Baber Studio will speak about the influence of Bachelard and other literary sources, including David Malouf’s 12 Edmondstone Street, on their architectural practice.

The Fryer Library Collection Teaching Space will showcase the Library’s rich literary, historical and architectural collections that include the manuscripts of David Malouf, Peter Carey, and Oodgeroo Noonuccal, as well as rare books, photographs and architectural plans.

This space will provide an improved setting for learning and research and incorporate digital technology to enhance the experience of Fryer Library’s heritage collections. 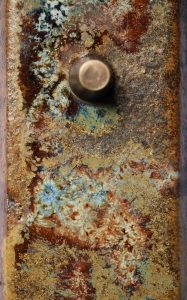 Shutter House is exhibited in the Museum of Brisbane’s “Gentle Northerly” exhibition as part of the Asia Pacific Architecture Forum, with original drawings and photography acquired by the Museum.

The Work of BaberStudio is included in the ‘Muji’ Exhibition, exhibited at the Gold Coast, Melbourne and Barcelona.

“The timber links of the hooked scarf joint connect to become linear, straight, and rigid due to the interlocking barbs and fixing pin. This enables short timber members to be extended, turning squat elements into slender ones, allowing them to ‘grow’ or ‘elongate’. These make spaces that are columnar and forest-like.

The plaster and timber links form a true chain, allowing freedom of rotation through their nested ridges and valleys. This enables both free-form structural profiles as well as catenary chains to be made in a plastic state before being cemented or fastened permanently. These make spaces that are arched and cave-like.” 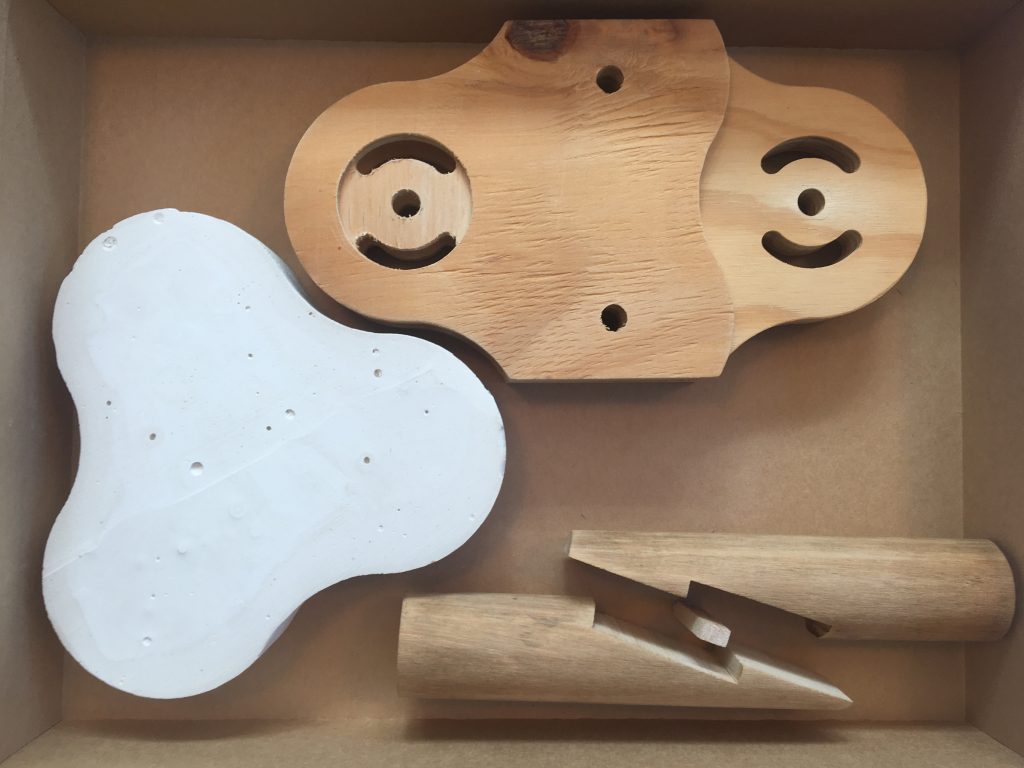 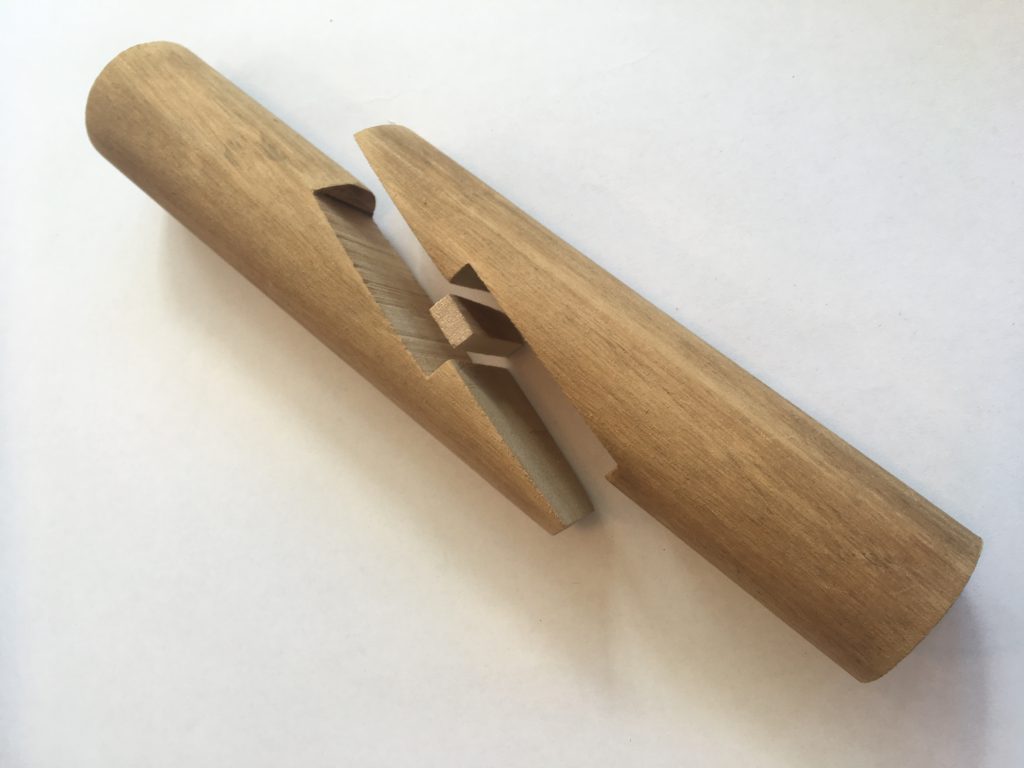 Kim Baber has represented the University of Queensland’s Centre for Future Timber Structures with Joe Gattas at the Fabricate 2017 Conference in Stuttgart, Germany. Their Pavilion was published in the book which can be found here. 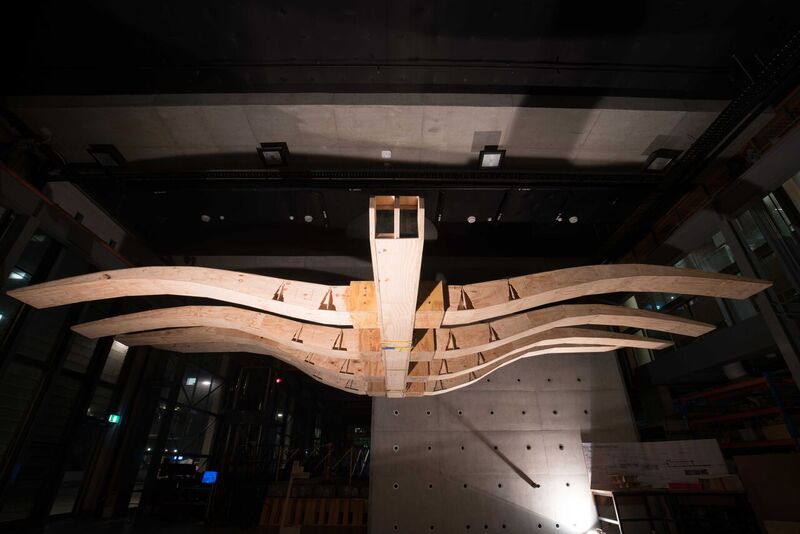 Baber Studio wins a regional award for New Houses at the Australian Institute of Architects Brisbane Awards Ceremony, for the Attic-Undercroft House. 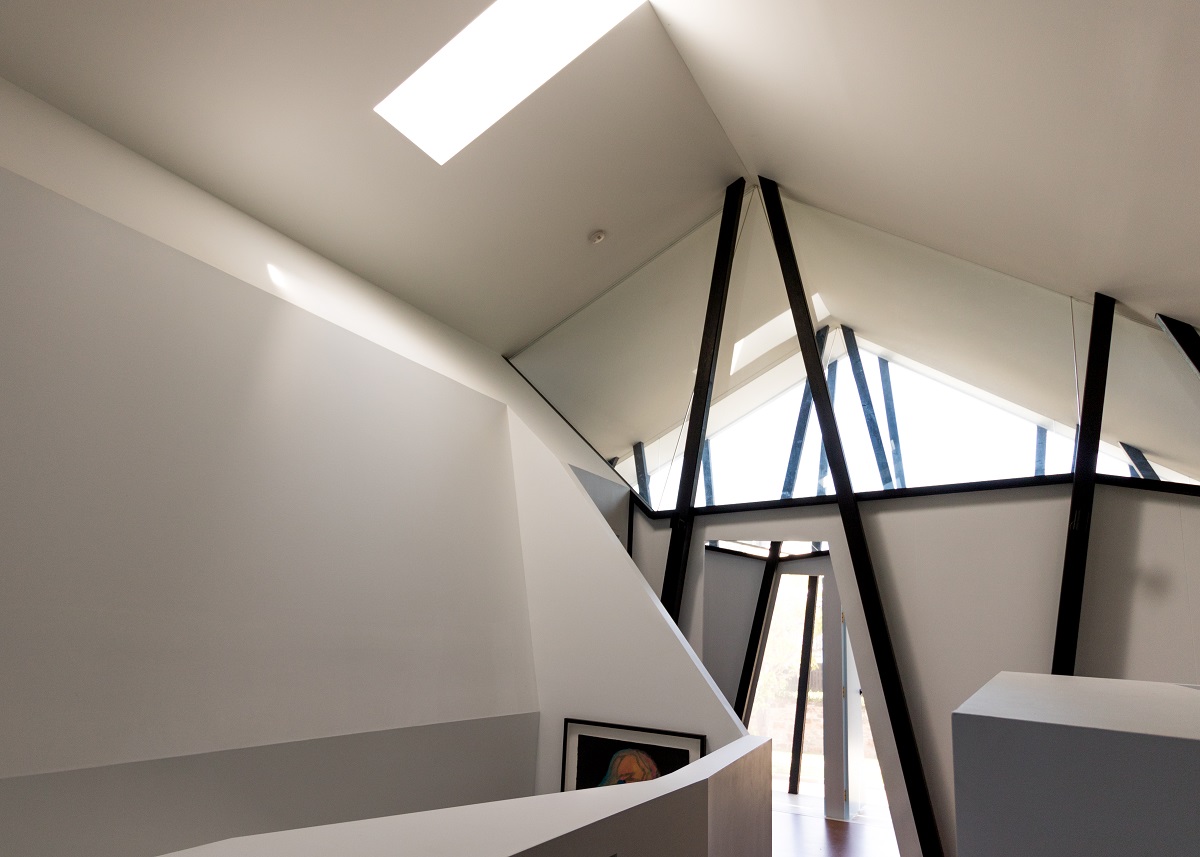 Kim Baber was awarded the Gottstein Trust Fellowship to conduct research of exemplary timber architecture in Switzerland, Austria and Japan. Kim will research benchmark community buildings including Kindergartens, Fire Stations, and public buildings built in CLT and Engineered timber including, 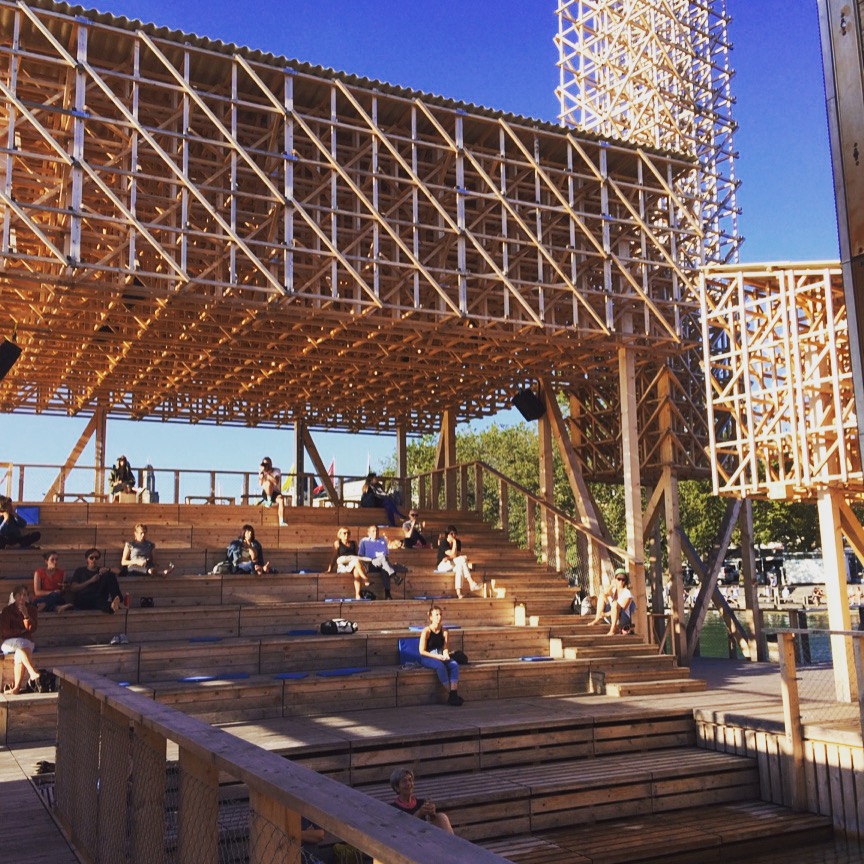 The Shutter House was published in the Autumn 2016 edition of Queensland Homes, which can be viewed here.

The Charming Squire received the Timber Flooring award at this year’s Timber Design Award. The microbrewery, restaurant and bar was a collaboration with Collins + Turner Architects and D’Occhio.

More about the Timber Design Awards including other recipients can be seen here. For more information about The Charming Squire please click the following here. 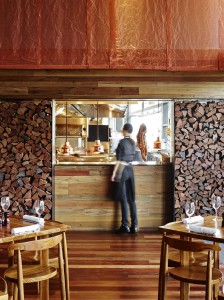 Activating the laneway, ‘Fish Lane Follies’ is an exhibition coordinated by Kim and Monique Baber, that showcases plywood structural forms created by final year, University of Queensland architecture and Engineering students. Sited publically, these experimental ‘follies’ create intrigue and discovery along the laneway. These installations occupy the undiscovered small spaces of the lane and explore an experimental architecture of plywood ‘scales and skin’. This is a public event to be enjoyed by all. 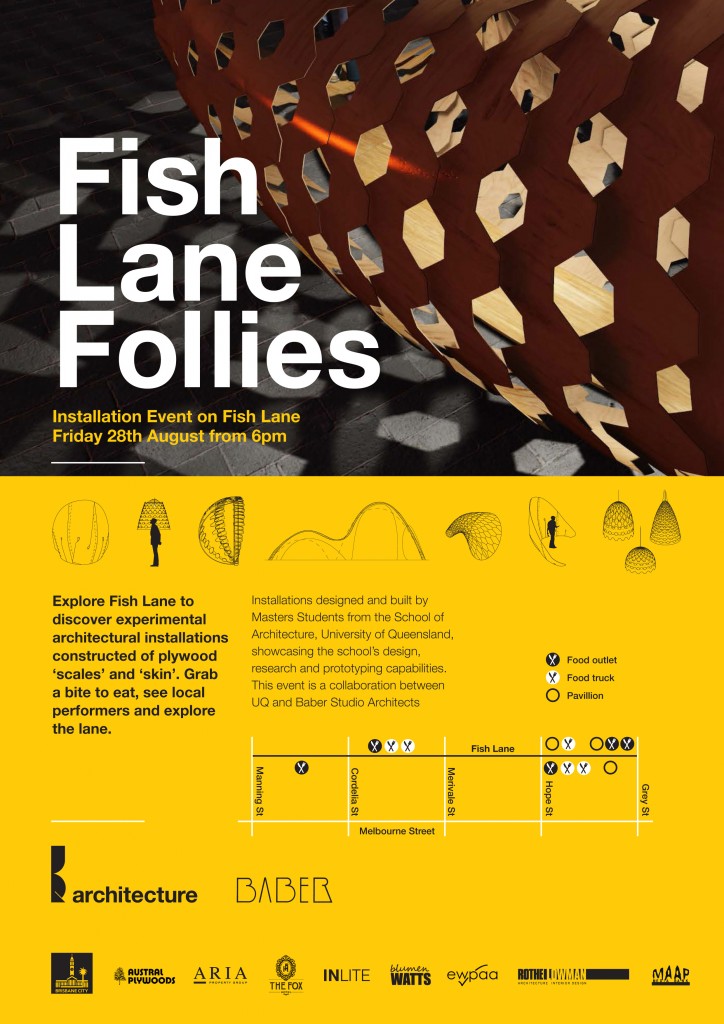 The Shutter House was included in the Sydney Morning Herald. The article can be viewed here 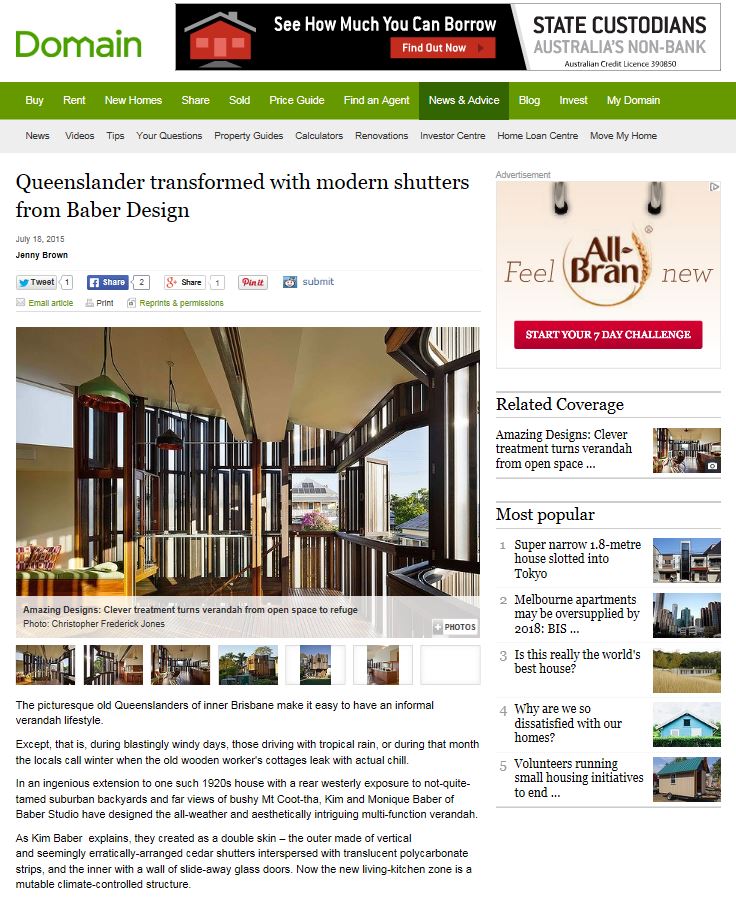 An article on the Shutter House and Baber Studio was recently included in the West End Magazine’s digital and physical publications. It can be read online here

More about the Shutter House can be seen found at this link. 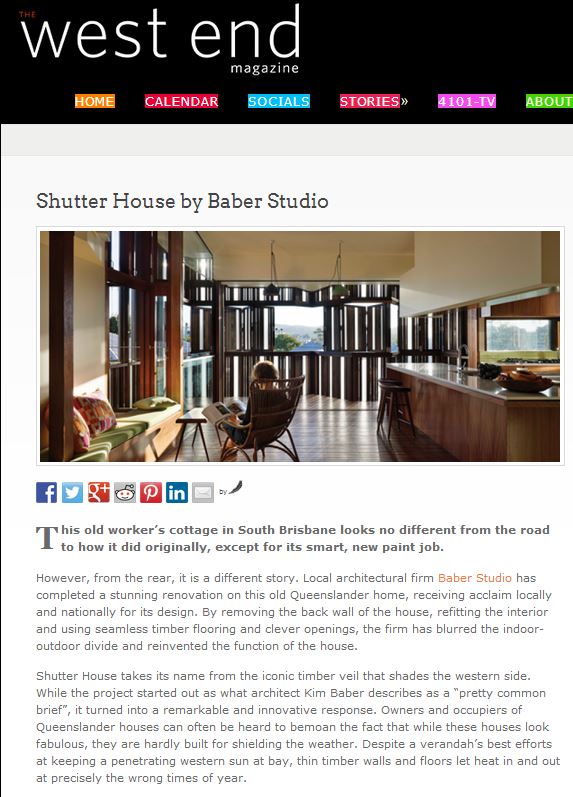 The Austin development was features on Architecture + Design, featuring the public art by David Templeman and Pricilla Bracks + Gavin Sade that was managed by Baber Studio for ARIA Property Developers

As part of this year’s recognition of the Emerging Architecture Prize and the National Conference, EmAGN has published a special edition newspaper article focusing on past recipients of the award.

Kim Baber, principal of Baber Studio was featured in an InDesign Live article entitled “Profiling Kim Baber, The Architect to Watch”.  The article can be can be read here 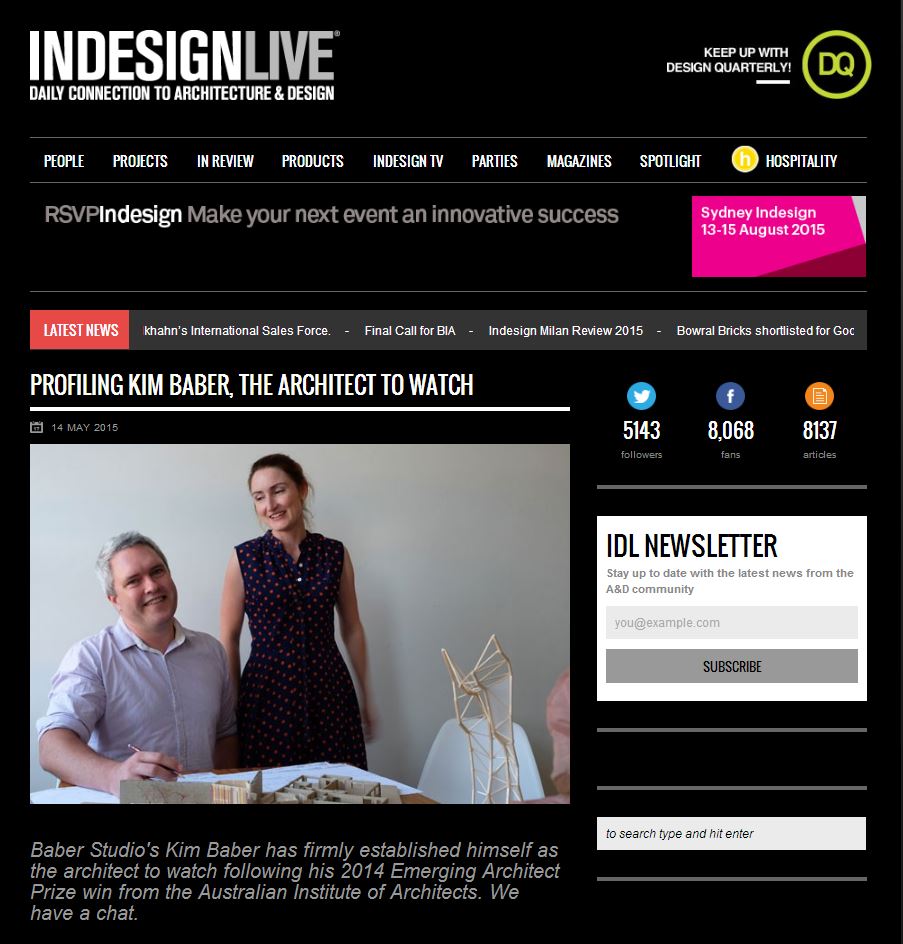 The Shutter House was awarded a Regional Commendation at the RAIA Architecture Awards in the Residential Architecture – Houses (Alterations and Additions) category. It, and the other awards presented on the night can be viewed here 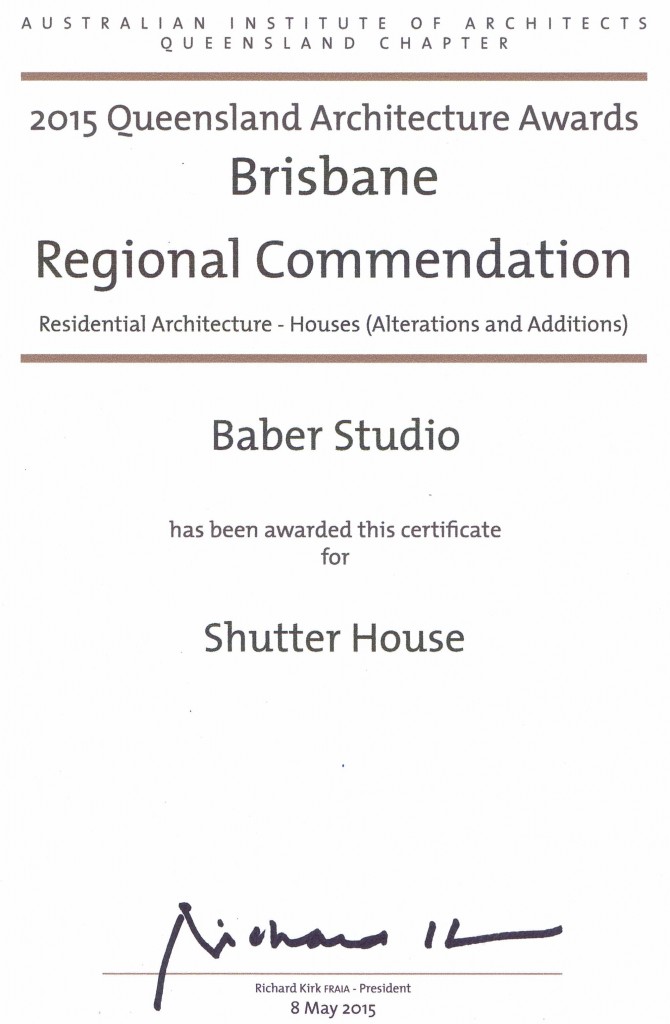 Baber Studio was published online in an article for Architecture & Design. It can be read here

Kim Baber presented at the second VALUE speaker series of 2015 organised by EmAGN along side Richards and Spence. 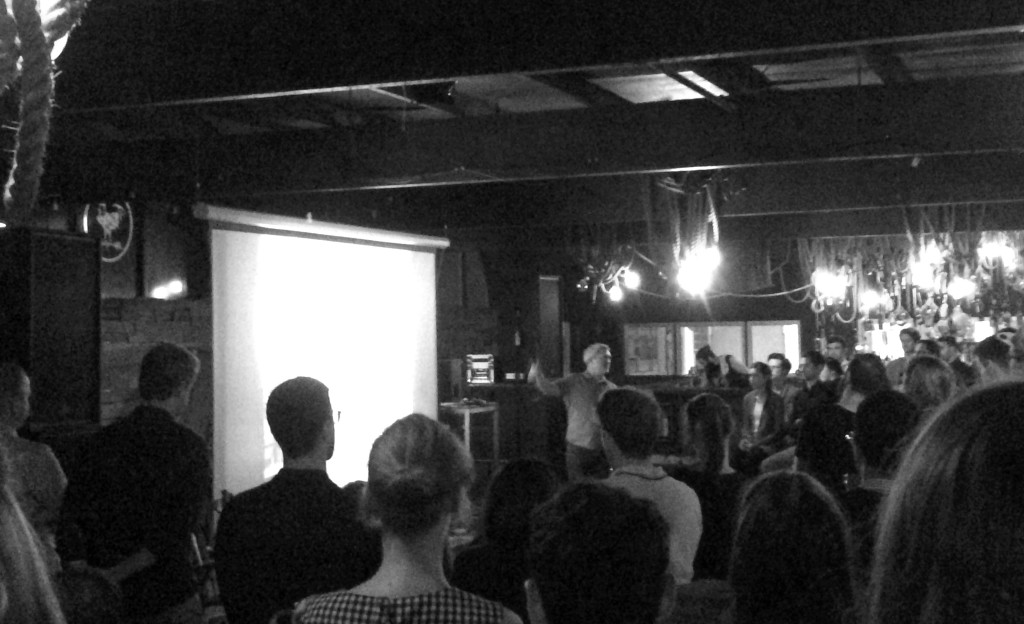 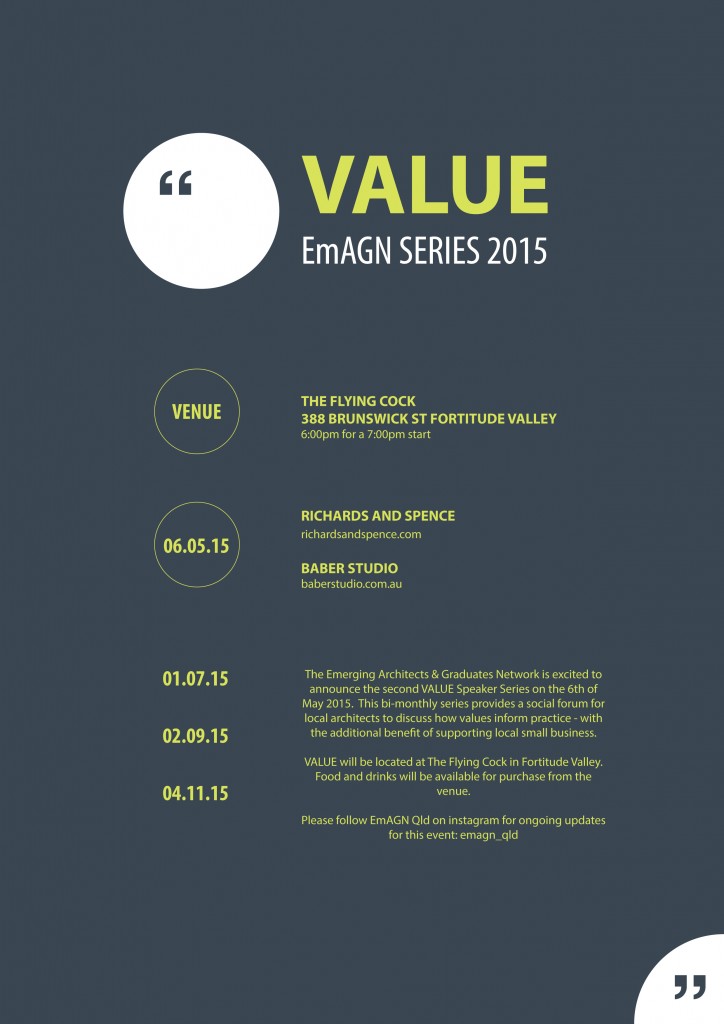 Baber Studio principals Kim and Monique were featured in an article for the Sum Of Us segment for Brisbane News. It can be seen here

The Charming Squire was featured in an article titled “Forty-eight hours in Brisbane: what to do and where to go” written by Brigid Delaney of The Guardian.

Baber Studio was shortlisted in a number of catagories for the 2015 Houses Awards. Shutter House was shortlisted in the Sustainability category and also the House Alteration and Addition Under 200m2. It and the other finalists can be seen here:

House Alteration and Addition Under 200m2

Baber Studio is also a finalist in the Emerging Architecture Practice, which is a new category for this year’s Houses Awards.

More information can be found here:

The Charming Squire, which was completed in association with Collins + Turner and D’Occhio has been published in Artichoke, Australia’s interiors and design magazine – http://architectureau.com/magazines/artichoke/ 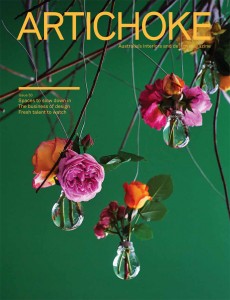 The publication can be found at local and interstate art galleries and more information about it can be found here. 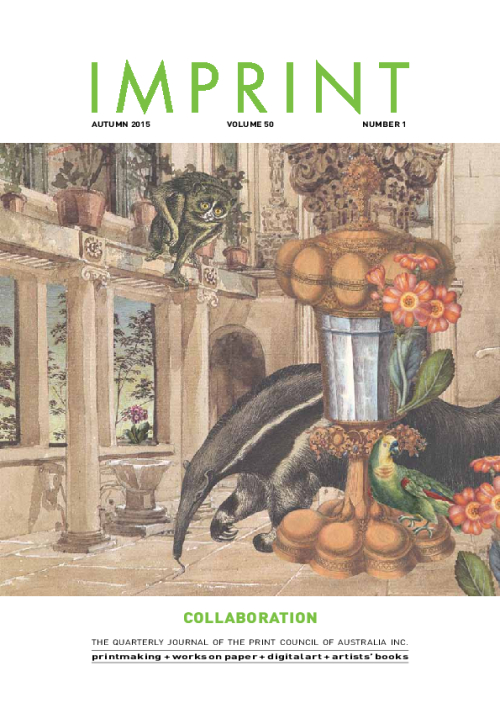 The Charming Squire is a finalist in the Hospitality Design category in this year’s Australian Interior Design Award.

More information can be found here 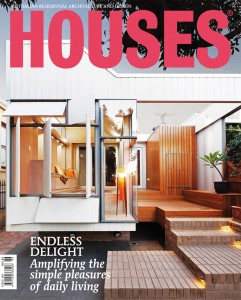 Kim Baber, Principal of Baber Studio was awarded the QLD Emerging Architects Prize by the Australian Institute of Architects at the 2015 President’s Dinner. 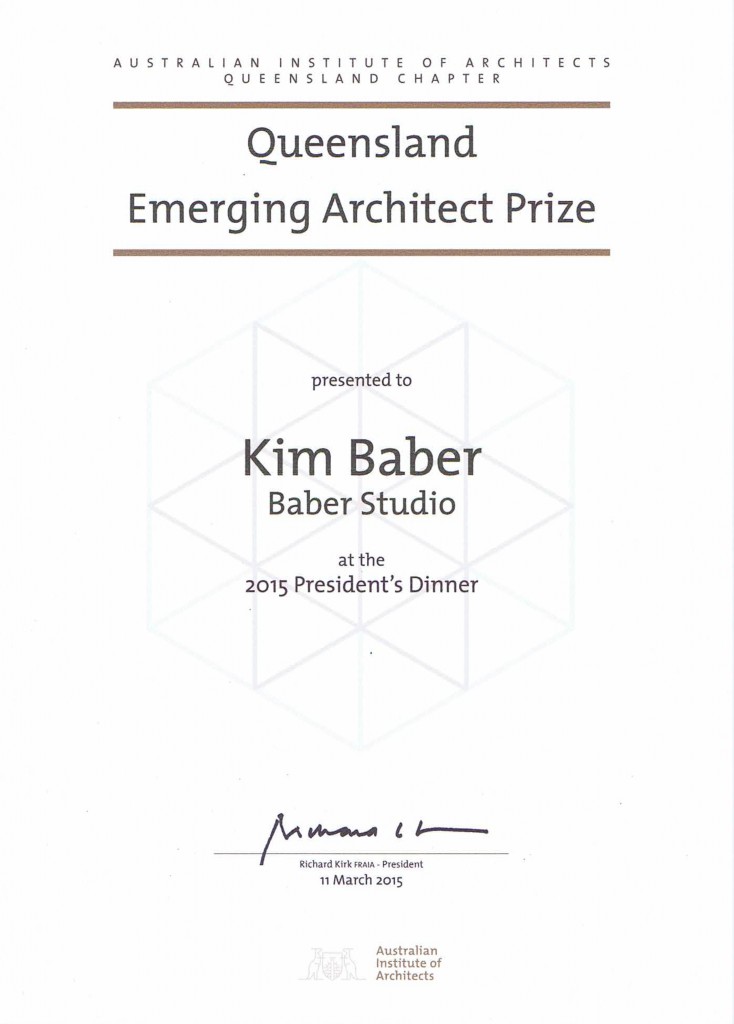 The Shutter House appears on Architecture AU in an article entitled ‘Life on the edge: Shutter House’ written by Margie Fraser. 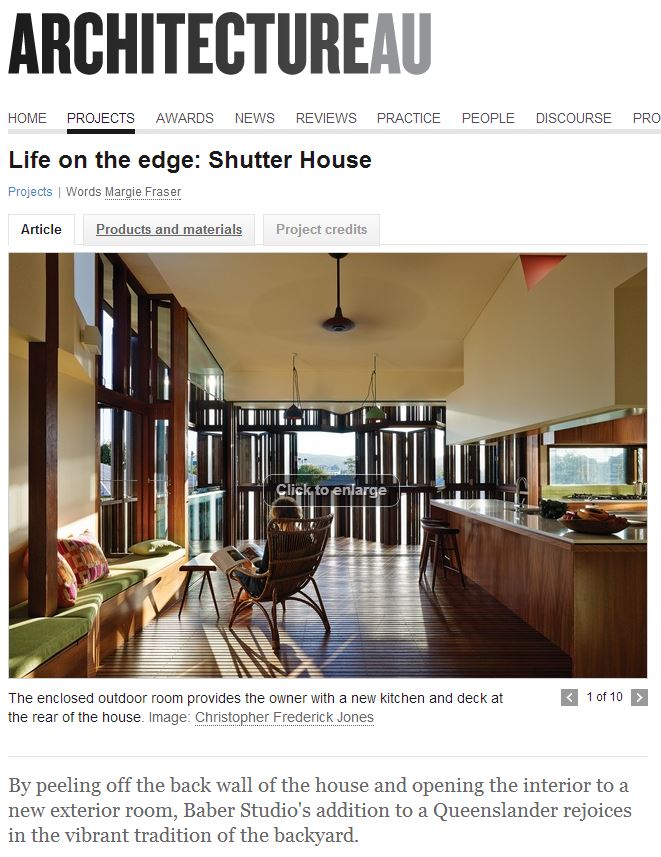 The Shutter House was recently published in the 1000th issue of Brisbane News.

The office fit out for Murphy Pipe and Civil, which was completed in collaboration with Marc&Co Architects and Jarosz Design has received a State Commendation in the 2014 Queensland Architecture Awards for Interior Architecture. 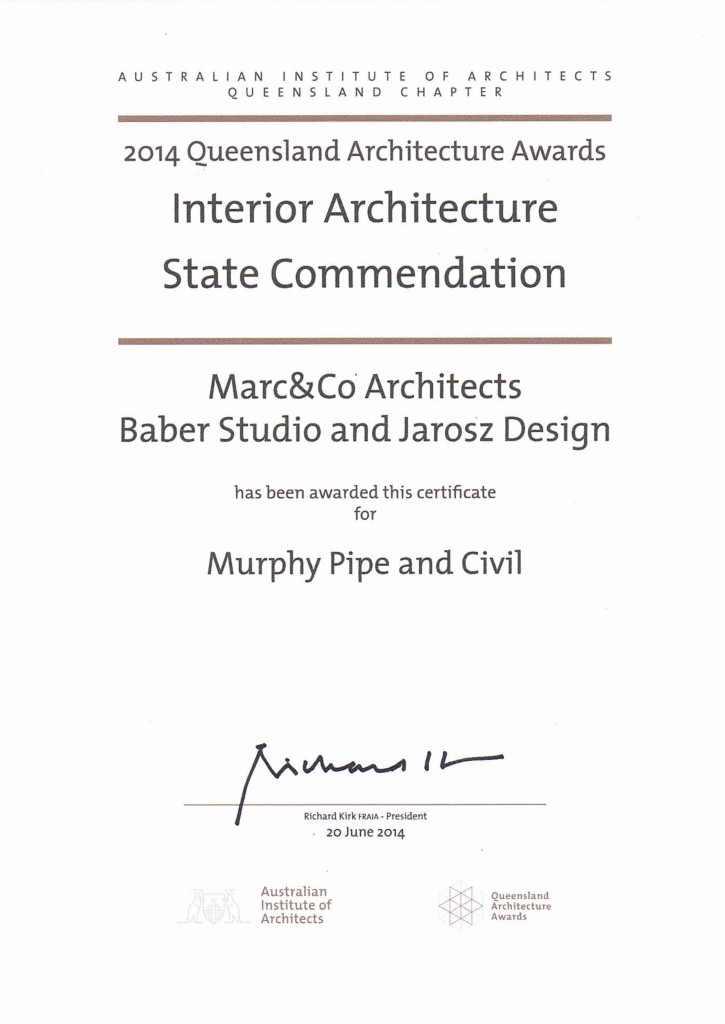 The office fit out for Murphy Pipe and Civil, which was completed in collaboration with Marc&Co Architects and Jarosz Design has received a Regional Commendation in the 2014 Queensland Architecture Awards for Interior Architecture. 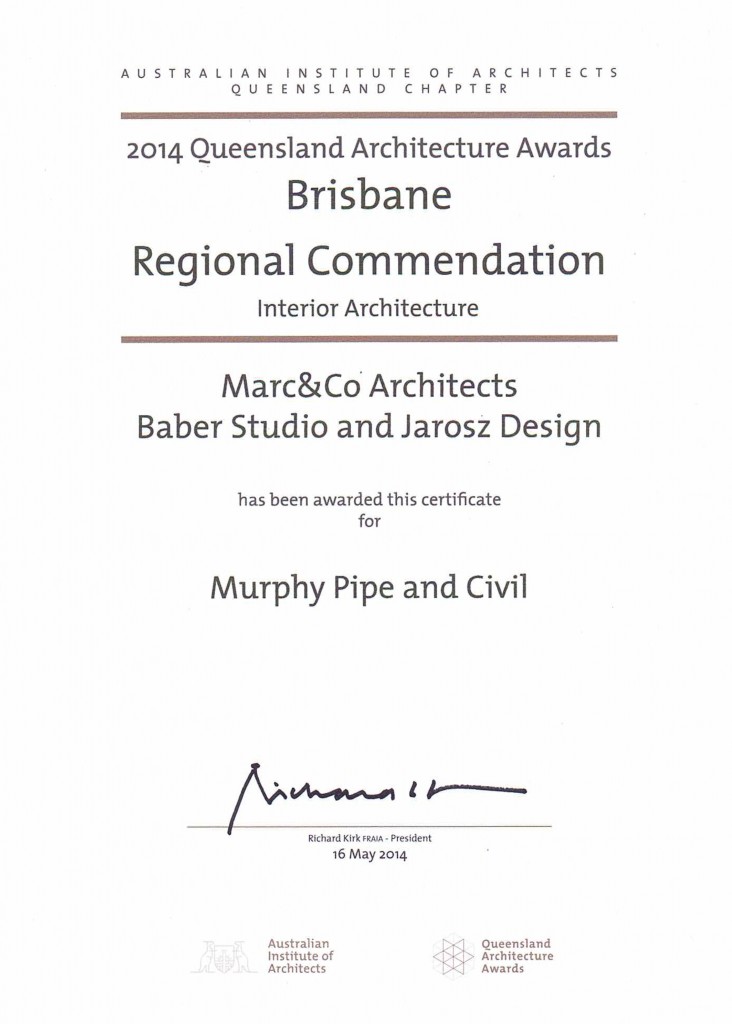 Baber Studio was mentioned in a recent article by the Australian Design Review which discussed the place and history of Donovan Hill.

The recently finished fit out for Murphy Pipe and Civil, which was completed in collaboration with Marc&Co Architects and Jarosz Design has been shortlisted in this year’s Australian Interior Design Awards. 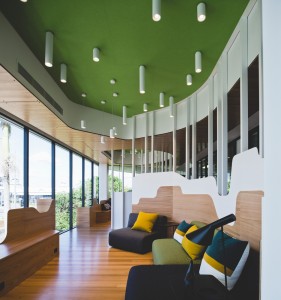 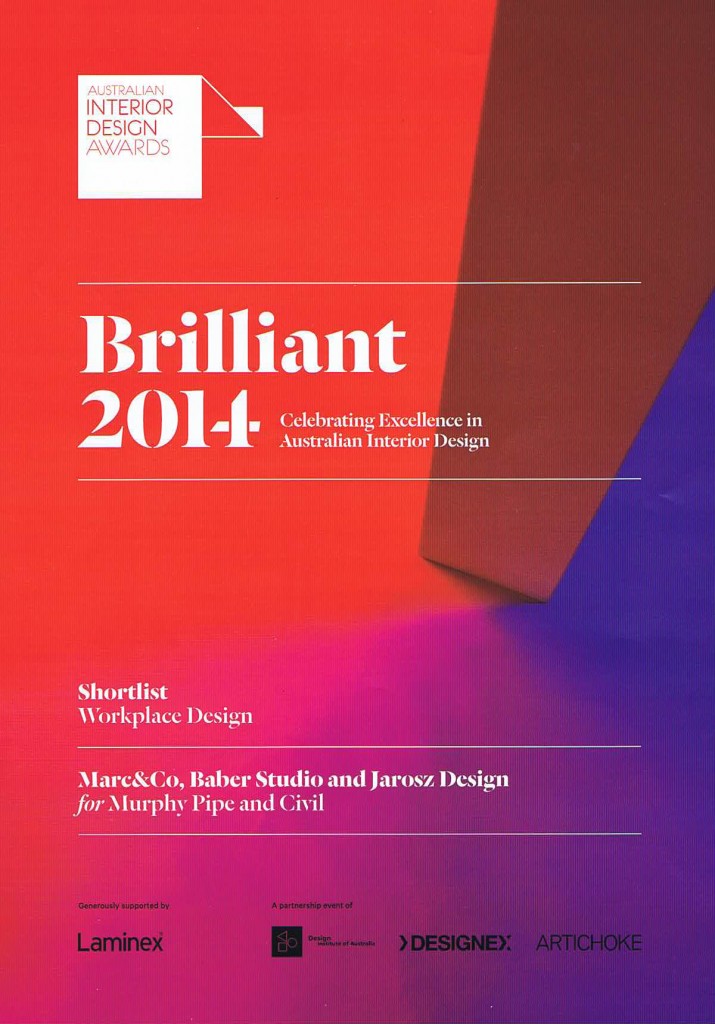 Baber Studio, in collaboration with Anupama Kundoo have been shortlisted in the Australian Interior Design Award for participation in the CUSP Exhibition: Designing into the Next Decade. The exhibition will be shown at the State Library of Queensland between 01 November 2014 – 08 February 2015. More information about the exhibition can be found below. 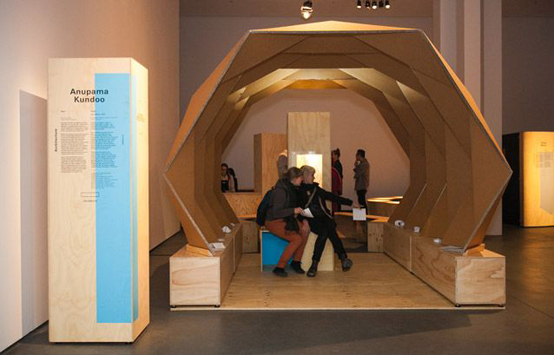 Anupama Kundoo, in collaboration with Baber Studio exhibited explorations into the use of ferrocement and folded origami paper forms as part of the Cusp Exhibition: Designing into the future.

Light Matters is part of ongoing research into building strategies that create a higher quality of life, with lighter environmental impact. The Light Matters team led by Dr. Anupama Kundoo, in collaboration with Kim Baber of Baber Studios, and Greg Killen of Greg Killen Consulting Engineers with assistance from five University of Queensland Master of Architecture students.

The current focus of the research is to arrive at a light weight ferrocement shelter prototype based on introduction of folds and bends that lend this thin material rigidity and make it viable as an affordable alternative to roof construction. Inspired by crease patterns developed in origami, the prototype shelter integrates geometry, engineering and material properties in the development of appropriate forms.

The prototype developed in full scale will be displayed as part of the CUSP: Designing into the Next Decade nationally touring exhibition organised by Object: Australian Design Centre.